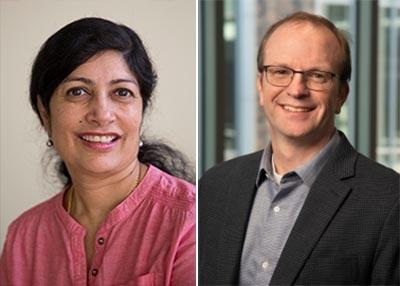 For the first time at Duke, the National Human Genome Research Institute (NHGRI), part of the National Institutes of Health, is awarding a Center of Excellence in Genome Science (CEGS) grant, to a group of Duke researchers, providing $14 million of research support over five years.

CEGS grants are high profile awards that support the formation of multi-PI, interdisciplinary research teams to develop novel, innovative genomic research projects using data sets and technology developed from the Human Genome Project. Seven PIs from across Duke will create the FUNCTION Center, an NIH-designated Center of Excellence, to develop technology that will make studying the complexities of combinatorial gene regulation not only possible but also routine.

Current technologies focus on a particular gene regulatory element or individual mutation and ask what the effect is individually. “It’s long been known, though, that those regulatory elements and variants work in combination in unexpected ways,” PI Tim Reddy said. “We think it’s those combinations that are driving what we see in disease.”

Researchers have been working for years studying one element of the genome at a time. “And while we have learned a lot from those efforts,” PI Charlie Gersbach said, ”they have also pinpointed that none of these parts of the genome work in isolation. The genome is a very complicated web that evolution has woven.”

Understanding how 2 million regulatory elements interact with each other will require scaling current technology to combat the complexity. “We know that genes aren’t turned on or off by a simple binary switch,” PI Greg Crawford said, “but instead it’s a result of multiple gene regulatory switches that work together.”

The FUNCTION Center will develop new types of experimental types of genomic data and create the first systematic and comprehensive framework to determine the effects of combinations of regulatory elements on gene expression and downstream phenotypes. They will combine their various expertise, from functional genomics, biostatistics, population genetics, evolutionary biology, rare/ultra-rare disease, and complex genetic and genomic datasets to help them achieve these lofty goals. “None of us look alike in terms of our skillsets, backgrounds, perspectives, technology,” PI Greg Wray said. “There is overlap, but we are all different, and that’s the strength of this project.”

Reddy adds, “It’s going to be extremely exciting and challenging, and we may fail more than we succeed, but there is no team that I would rely on more to solve all of these problems.”

This particular group of PIs are no strangers to each other. In fact, the group has been working together in various contexts for years. However, this is the first time all seven of them are working together on the same grant. “There is both an openness to new ideas and a level of intellectual rigor that makes innovation more likely,” PI Warren Kibbe said of the team. 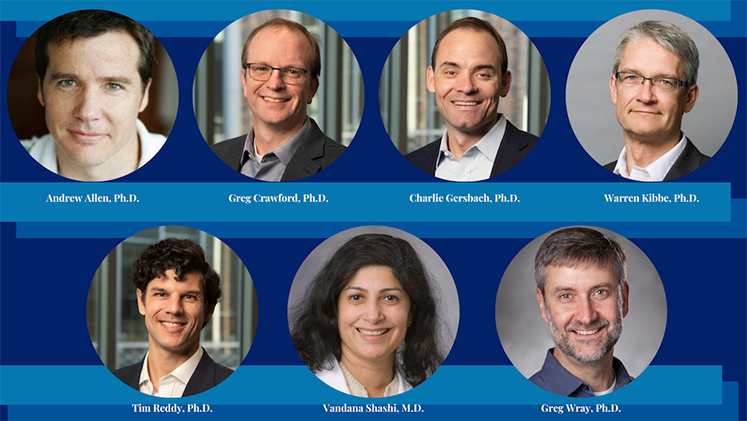 The team’s efforts have the potential to transform how researchers study human disease and help identify combinatorial regulatory mechanisms of common, rare, and ultra-rare diseases. “There’s evidence that many common diseases like schizophrenia and diabetes, and possibly some more rare disorders are a result of genetic changes that somehow alter individual or combinations of gene switches,” Crawford said. Their work will focus on how combinations of switches work together and how patients with genetic differences within those switches impact gene expression, and ultimately, their susceptibility to different disorders.

“What excites me most is discovering new genetic causes of disease,” PI Andrew Allen said. “I’ve been lucky enough to experience that a number of times in my career and it’s addictive.” Allen believes their research may allow them to do just that but to a much larger degree than ever before.

PI Vandana Shashi focuses her research on undiagnosed and rare diseases. “I’m excited for the chance to better understand the underlying causes for difficult to resolve Mendelian phenotypes,” Shashi said, “and to provide diagnoses and ultimately better patient management.”

Their research results will go into the FUNCTION Portal – an online portal they will build that will collect and communicate measures of the regulatory activity of the noncoding genome. The Portal will include methods the team develops and will integrate results from Center experiments and analysis with those from external studies by consortia and individual labs. The team aims to make the FUNCTION Portal a key resource for researchers to use broadly across many areas of biomedical science.

Another large aspect of the FUNCTION Center will be geared towards education and outreach. “We are in one of the most racially diverse areas in the country,” Reddy said, “and a substantial portion of the grant aims to work with historically Black colleges and universities in the context of building genomic research capacity in the country.”

Wray plans to pull in Center for Genomic and Computational Biology’s (GCB) existing NIH R25 grant, the Summer Scholars Program in Genome Sciences and Medicine, into this work. The Summer Scholars Program is geared for first- and second-year undergraduate underrepresented minority students and is open to students from any college in the US. “I’m hopeful that we can recruit some students into this project through Summer Scholars,” Wray said. “They could come work with CEGS investigators and maybe even become interested in pursuing this research at Duke for graduate school.”

The FUNCTION Center will also offer pilot projects, a retreat, and specialized community engagement such as workshops, and seminars. Workshop themes will vary each year with a focus on technology development and computational and evolutionary models. Activities will include hands-on workshops, demonstrations, panel discussions, and data challenges led by FUNCTION Center faculty, trainees, and staff. Students and postdocs in the FUNCTION Center will have opportunities to train between wet and dry labs, between basic and translational research and between applied and theoretical research.

“We are getting the opportunity to work deeply on some knotty problems in genomics with a fantastic team,” Kibbe said. “It’s going to be fun!”

This article was first published in GCB News.

If you value life, it's about more than just protecting the unborn